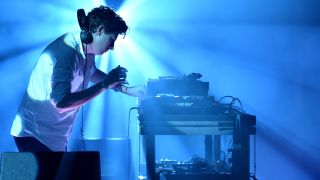 Guitar bands having DJs as members is certainly not a new phenomenon - those of us who lived through the nu-metal era will no doubt recall a time when no self-respecting rap-rock outfit would be seen dead without a turntablist pointlessly scratching away in the background of their videos.

Jamie xx’s relationship with The xx, the band that gave him his break, is far more than just set-dressing, though; right from the start, his assured DJ mixes helped raise the band’s profile and his sparse beatmaking tied their sound as much to the post-dubstep productions of Mount Kimbie and James Blake as to any of their indie contemporaries.

Having met his bandmates at the same South London comprehensive school that educated Four Tet and members of Hot Chip, Jamie Smith’s production and DJ style has always been tied heavily to his home town’s sonic melting pot, blending influences from UK dance music, grime, dancehall and hip-hop. And, with a Mercury win with The xx, plus further Mercury and Grammy nominations for his one solo album to date, 2015’s In Colour, it’s fair to say that Smith has cemented his place amongst the UK’s most lauded electronic musicians.

He’s returned in 2020 with his first solo track in five years - idontknow, an ambitious concoction of sudden BPM shifts and outlandish vocal effects - and a new Essential Mix for Radio 1.

With a second album inevitably not far behind, let’s take a look at a few of his production highlights so far.

The xx’s self-titled album remains one of the most impressively coherent debuts in recent memory; from their simplistic aesthetic to the stripped-back, intimate nature of the sound, it’s an album with an undeniable distinct identity.

Smith might not have been the only factor in its success - the muted guitar lines and vocal interplay obviously play a major role - but his minimal beatmaking and less-is-more production style tie the whole thing together.

Nowhere is that more evident than on the album’s Intro track, a bold statement of intent so memorable it risks overshadowing the rest of the album. Despite being the record’s most maximalist moment, it’s still a masterclass in restraint, drawing its oddly anthemic power from a simplistic hip-hop beat built of little more than a meaty kick drum and punchy snare.

Taking on a single remix of an artist as respected as Gil Scott-Heron would be daunting for any producer early in their career, which makes it particularly impressive that Jamie xx made an album’s worth barely a year after his band’s debut was released.

Scott-Heron’s final album, I’m New Here, was something of a late-career masterpiece, notable for its dark themes and excellent, minimal production from XL Records boss Richard Russell. It was at Russell’s request that Jamie xx took on the project of reworking the LP in full, and although the pairing seems a little odd on paper - there being such a disparity in age, background and sound between the two artists - the contrast often works in the album’s favour.

NY Is Killing Me is a great example of this; despite the inherent Americanism of the title and Scott-Heron’s voice, Jamie xx’s production channels South London dubstep via a hint of dancehall, creating a weirdly sparse and distinctive club banger.

Released in 2011 after cropping up in mixes for almost a year before that, Far Nearer was Jamie xx’s first proper solo single.

A joyful mix of emotive vocal samples and bright melodic elements, the track was a vivid contrast next to the minimal, atmospheric post-dubstep that many of his London peers were creating at the time - and, for that matter, the moody minimalism of Smith’s own band.

The track is distinctive for its steel drum hook, an instrument that Smith has wrung a lot of mileage out of over the years. It gives the track an almost tropical house quality, but the punchy, garage-indebted drums and warped vocal samples put Far Nearer a cut above the vast majority of that genre.

As a DJ, Jamie XX has always worn his influences on his sleeve, peppering sets with an eclectic blend of everything from house music through to UKG, jungle, dancehall and grime.

One element that consistently crops up, though, is the distinctly British sound of classic rave tracks and ‘90s hardcore. His one solo album to date, In Colour, is liberally sprinkled with warehouse basslines, sliced-up breakbeats and samples cropped from rave tapes, DJ interviews and London’s seminal pirate radio stations.

This pre-album single is his most overt tribute, though. Built around samples lifted from Mark Leckey’s lauded short film Fiorucci Made Me Hardcore, itself a collage of ‘found’ footage gathered from the depths of the ‘90s rave scene, All Under One Roof Raving is an all-out love letter to the euphoria of dance music.

Smith certainly isn’t the first or only producer to tap into the legacy of rave and hardcore - Four Tet, Joy Orbison, Special Request and many others have all followed a similar path, arguably with more subtlety - but what makes All Under One Roof Raving so good is its accessibility and songcraft. This isn’t simply a ‘90s tribute to drop as a little nod to the ‘ardcore heads in the crowd; it’s an example of a producer paying homage to his influences whilst keeping things very much tied to his own, distinctive sound.

As with his Gil Scott-Heron album, Smith’s remix of XL labelmate Adele proves how much of a dab hand he is at re-contextualising material other producers might be wary of tackling.

Attempting to turn a distinctive vocal pop track into a potential club banger is no mean feat (lesser producers tend to settle for upping the tempo and sticking a 4x4 underneath) but Jamie XX pulls it off with aplomb here, stripping out most of the original production and replacing it with little more than a wonky, bashment-inspired drum groove.

What makes the remix work, though, is that Adele’s undeniably impressive vocal performance remains the star of the show. Aside from pitching down the chorus and some subtle rearranging, Smith largely works around the original rather than attempting to upstage it, and the remix is all the more effective as a result.