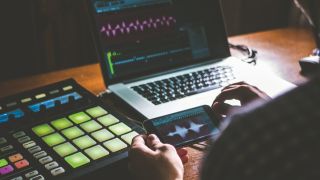 The creation, performance and production of music has never been easier or more accessible. If you own one of the best laptops for music production, with a few small steps, you can access the kinds of technology once the preserve of professional studios. From entire ‘band in a box’ tools, through to expansive multitrack recording environments, the things you can do now with little more than a consumer-grade laptop is staggering.

We think it’s a great hobby, and one we want to share. In this guide, we’ll outline some tips for choosing a laptop geared towards performing and making music in your home recording studio. Read on to learn everything from the spec you’ll need, how you can optimise it for a recording, as well as getting some advice on specific details to look out for when choosing a laptop for recording music.

1. Start with the spec

When you’re choosing a laptop to record music on, there are certain things you’ll need said laptop to achieve. Key among those is pure, unadulterated performance. Fancy features like branded speakers, touchscreens, or 4K resolution are nice to have but they are not essential for a music production laptop. Here, it’s all about your CPU, RAM and storage media. Each of these components will dictate how much work you can do, and how quickly you can do it.

The CPU controls how quickly your laptop will process things, and how many of these things it can do at the same time. Virtual instruments, plugins and other processing tasks all use the CPU, and you’ll quickly find things grind to a halt if your CPU isn’t up to the job at hand. Intel Core i5 and upwards, or the AMD Ryzen 5 and upwards, should give you enough juice to get through most tasks.

RAM controls how much data is kept in the laptop’s short-term memory. This manifests itself in how many tracks of audio you can have in your arrangement, or in how many individual samples you can use. Ideally here you want upwards of 8GB. Any less than that, and you’ll find working with digital audio workstations (DAWs) can be a harrowing experience. It’s also worth looking at whether this can be upgraded in the future, which is a simple enough job but has a big impact on performance.

Finally, storage media is arguably the least important of the three factors we’ve outlined, but certainly one to bear in mind. While traditional hard disc drives (HDDs) can store huge volumes of files and data, they aren’t the quickest at getting that data where it needs to be. For this purpose, you should look for solid-state drives (SSDs) which offer lightning-fast data transfer speeds. So, for example, you can store large sample libraries and stream them into your DAW without glitches or other problems.

Ah, finance, the cruel mistress. While we’d all love to spec out a top-end Apple MacBook Pro, there are certain economic realities the vast majority of us have to face. It’s important, therefore, to have an idea of how much you’re willing to spend in your mind before you hit the online stores. Our guide to choosing a budget laptop exhibits some great options at the lower end of the scale but, as with anything, you get what you pay for. For us, the leap in performance once you get past the $/￡500 marker makes that the sweet spot for a basic machine suited to music production.

As we mentioned above, it’s worth keeping in mind what you’ll be using the laptop for. If it’s being bought with the sole purpose of music production, go hard on the spec sheet. Wring as much in the way of CPU, RAM and storage media as you can out of your hard-earned dollars and ignore those fancy headline-grabbing features. Touchscreens and aesthetics are great, but not at the expense of performance.

That said, opt for SSDs over HDDs where possible, and connectivity-wise it’s a safe bet to assume peripherals and external gear like MIDI keyboards and audio interfaces will pivot to USB-C in the future so make sure you’re well-stocked in those areas.

Also, consider battery life. While many, if not most, studios using laptops will have them set up in one static location, the benefits of portability shouldn’t be discounted. Throwing your entire studio setup in a backpack and working on the beach, or up a mountain, for example, is a liberating experience and one you can’t do with a desktop PC.

The relationship between hardware and software is heavily intertwined in music production. A laptop is only as good as the software it runs, and the software is only as good as the laptop will allow it to be. Apple has a clear advantage here in that Logic Pro X, its proprietary DAW, is designed specifically to work only with Apple’s OS and, as such, there is an inherent boost in performance. It all, to coin a phrase, just works.

Windows-based laptops, on the other hand, still have a huge selection to choose from, including Ableton Live, Cubase and AVID’s Pro Tools, each with their benefits and drawbacks. Putting the Apple apps to one side, any decent spec laptop should be able to handle projects from any major DAW. Which leaves you with another decision to make, and one which we cover here.

It’s reasonable to question how long you expect – or hope – to get out of your laptop. The technology is advancing so quickly nowadays and it’s easy to get sucked into a competition to always have the fastest, most powerful machine. It’s worth keeping an eye on whether your chosen laptop can be upgraded yourself in the future.

Windows-based machines, specifically those from the gaming domain, often allow the user to upgrade individual components like RAM or storage without too much hassle. Music production is still possible on older computers however, using the methods we outline here.

While the laptop itself is the brains of the operation, there are certainly other items you’ll want to incorporate to make the most of the tech. An audio interface, which outsources the laptop’s audio handling capability, will allow you to connect audio inputs – instruments and microphones – with audio outputs like studio monitors and headphones.

Likewise, external gear like controller keyboards and grooveboxes like Native Instruments’ Maschine can all expand the capabilities of your rig. USB acts as the gateway here, so you’ll need to ensure you have either a good amount of connectivity within the laptop or the gear in question can operate via a hub – not all gear can, so be sure to research this beforehand.

Audio driver compatibility is important in music production. Most audio equipment and software you’ll use operates using ASIO drivers for audio, which can be a mixed bag depending on your laptop. When they work properly, they allow recording and performance with low latency, meaning almost instantaneous feedback from what you’re playing and what the laptop is hearing. When they don’t, they can be a nightmare full of pops, crackles, glitches and timing problems.

In our experience, Apple has the upper hand with regards drivers, requiring little in the way of effort or thought. Windows, on the other hand, can be troublesome and sometimes requires a bit of forum-digging to solve certain problems. This is fine – rewarding, even - if you’re hands-on with computers, but if the thought of wrestling with settings leaves you cold then we’d advise serious consideration over which platform you choose.

As with any major purchase, our advice is simple. Identify what you’re trying to achieve and start outlining what’s important, what’s just ‘nice to have’ and what you can live without. For the hobbyist looking to dabble in composition and recording, while also carrying out regular laptop functions like email and video calling, a Windows machine with the spec we discussed earlier will work just fine. For the more serious, or more advanced user, we would point you towards either a higher-performing Windows laptop like the Dell XPS range or committing to the Apple eco-system with a MacBook Pro.

Music production is, to us, one of the most rewarding ways to express your creativity. The technology we choose to work with should, ideally, run silently in the background, facilitating our work without ever being the centre of attention. By researching – as you are – and making the right choices, you should end up with a laptop that will serve you well for the foreseeable future.

The best of MusicRadar in your inbox