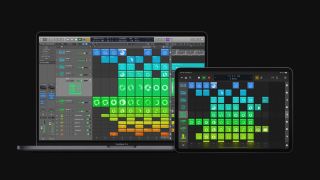 In what’s being described as “the biggest update to Logic since the launch of Logic Pro X”, Apple has unveiled version 10.5 of its flagship DAW. This adds Ableton Live-style clip launching in the form of Live Loops, Remix FX, two new samplers and several tools that are designed for beat creation.

The Live Loops functionality was accidentally revealed by Apple back in March, but now it’s official. Promising to let you create music in new freeform and nonlinear ways, it enables you to organise loops, samples and recordings on a musical grid, from where you can perform and capture different arrangement ideas that can then be viewed and edited on the timeline.

Remix FX, meanwhile, can be used in conjunction with Live Loops and can be performed in real-time over individual tracks or the entire mix. You can also trigger both Live Loops and Remix FX using the free Logic Remote iOS app, giving you even more creative freedom.

Moving on, Logic has finally got a replacement for the EXS24 in the form of Sampler, which features a new, more contemporary design and expanded sound-shaping controls while maintaining backwards compatibility. You can use it to create and edit sophisticated multisampled instruments using drag-and-drop workflows that automate complex production tasks.

When time is of the essence, meanwhile, there’s Quick Sampler, a fast and simple tool for turning any individual sound into a playable instrument. We’re told that musicians can pick a sound from within Logic, the Finder, Voice Memos, or even record directly into Quick Sampler. With just a few clicks, an imported sample can be trimmed, looped, and played across a keyboard controller, with access to creative sound-shaping controls.

For sound generation, there’s Drum Synth, which can be used to create kick drums, snares, toms and percussion sounds, all of which have dedicated sound-shaping controls.

This can be used in conjunction with the new Drum Machine Designer, which lets you build custom electronic drum kits. Each drum pad can host the new Quick Sampler and Drum Synth plugins, making it easy to edit and shape individual sounds within a drum kit. After kits are created, they can be played in real time, or programmed with Step Sequencer.