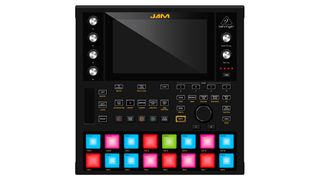 Behringer’s unconventional approach to product development and marketing has continued with the announcement that it’s launching a new Facebook group devoted to DJing and production. Not only that, but it’s also posted a render of what appears to be a potential MPC-style standalone production workstation known as Jam.

The group has been set up so that the public can speak to Behringer’s product designers and engineers and work with them to “co-design” products.

“Please share all your ideas - no matter how crazy they may be,” says Behringer. “We fundamentally believe in giving everyone a voice - without any fear, trolls or distractions.

“We only invite people to this group who truly intend to contribute, who are courteous and especially respect opinions of others. For the same reason, we have also decided to now pay less attention to other public forums so we can serve you here.”

To kick things off, Behringer has posted what appears to be a mock-up of a potential product called Jam. This includes what we’re guessing would be a touchscreen, along with 16 pads. It’s suggested that sampling would be built-in, too.

Whether this or any other similar product ever comes to market remains to be seen, but Behinger says that it wants to “turn the DJ and production world upside down,” so something is probably on the way.